John Johnson and the history of the collection 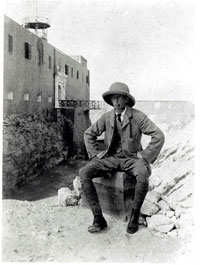 John de Monins Johnson (1882–1956) was born in Lincolnshire but spent most of his life in Oxford. He was educated at Magdalen College School and then at Exeter College, where he read Greats and then Arabic. After a short career in the Egyptian Civil Service, he became a papyrologist, discovering a Theocritus papyrus 900 years earlier than any previously known manuscript of the author. Although he subsequently co-edited a monograph on this papyrus (A S Hunt and J de M Johnson, eds., Two Theocritus Papyri. London: Egypt Exploration Society, 1930), this career was cut short by the outbreak of the First World War.

Unfit for military service, Johnson returned to Oxford and was employed by the Oxford University Press as Assistant Secretary to the Delegates of the Press. In 1925 he became Printer to the University of Oxford, a post which he held until his retirement in 1946.

In Egypt Johnson had wondered what we were doing to preserve our immediate paper heritage. In Oxford, at Oxford University Press, he was able to form his monumental collection: the Constance Meade Collection of Ephemeral Printing, named after his benefactress – the great-granddaughter of Bishop Percy of Dromore.

In the broad range of his vision, Johnson was a pioneer. Previous collectors had focussed on one area of what came to be known as printed ephemera (ballads, trade cards or bookplates, for example). John Johnson collected it all, forming (in his own words):

Collecting printed ephemera was Johnson’s hobby. Crucially, he collected retrospectively, believing that ephemera should survive by chance and not by design. He established 1939 as his cutoff date. The earliest piece of printed ephemera in the collection dates from 1508 but its strengths are in the 18th, 19th and early 20th centuries. Johnson assembled about 1.5 million items, divided into 1,000 subject headings.

During the Second World War, Johnson kept the press running and was responsible for the security of the surrounding area, living at the Press. Working on his collection, often at 4 am, was his only recreation.

Johnson was awarded an Honorary DLitt in 1928 on his completion of the printing of the Oxford English Dictionary and was made an Honorary Fellow of Exeter College in 1936. He was appointed CBE in 1945 for special services during the war.

After his retirement, he continued to work on the collection until his death in 1956. He is buried in Headington Cemetery.

Johnson's legacy to the University was a unique collection of (mainly) printed, (mainly) single sheet material, which provides the social and printing historian alike with primary research material, and the picture researcher with striking images – products of the woodblock, the engraver's plate, the lithographer's stone, etc.