Manuscripts are not frequently rebound in the conservation department – we strive to preserve the integrity of books and their bindings wherever that is feasible, but here the curator thought that rebinding was the best option.

Nicole Gilroy, the Book Conservation Team leader, recognized this created an opportunity to augment and transfer these skills within the team, and a training project was initiated.

The St George's Hours (MS. Don. D. 206) is a late fourteenth-century Book of Hours. It was purchased by the Bodleian Library in 2000, with funding generously donated by the Friends of the Bodleian.

The manuscript is of high importance to the Bodleian Libraries due to its Oxford connection. A dedication in the calendar to St Georges, Oxford, refers to the collegiate chapel in Oxford Castle, founded in the eleventh century.

This is the only Book of Hours that is probably of Oxford origin in any Oxford library. Damaged and incomplete, it was put forward for conservation sponsorship in 2011.

It was this book which initiated the overall project. 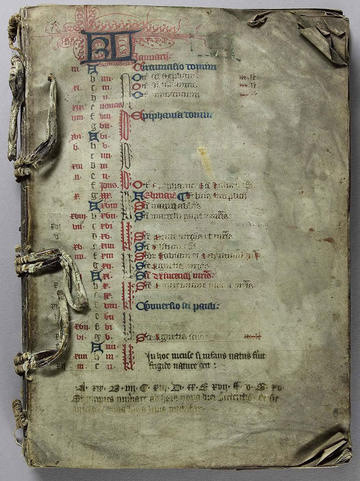 The St George's Hours before treatment

It was in an early eighteenth-century binding that had been re-backed, though the sewing originated from an earlier binding of unknown date. Access to this manuscript for scholars is important not so much for its religious content, but because it is written in middle English, the language of Chaucer, an English dialect used between the late twelfth and the late fifteenth centuries. The sewing had broken in several places, with the resulting fragmented textblock vulnerable to further damage and loss.

The illumination of this manuscript was never finished, and because of this, it is an important source for the study of medieval book production. The binding was possibly early seventeenth-century, and had been re-backed at the Bodleian Library. The sewing structure had broken down, causing the pages to rub against each other, putting the beautiful illuminations at risk. In addition, it was felt that the seventeenth-century binding, with its pulp boards, would be better preserved by not being re-used.

This project also worked as a training opportunity. Our senior book conservator demonstrated each stage of rebinding, and it was followed by two book conservators in the team. This way of working was highly beneficial, providing the opportunity to witness and discuss the challenges unique to each manuscript. Repetition also enabled refining of techniques and consolidation of knowledge.

The Disce Mori (MS. Laud Misc. 99), in particular, presented challenges, prompting much discussion and resulting in a series of bespoke solutions. The original sewing support holes were very crooked, but it was decided to reuse them rather than to repair them and make new holes.

It was difficult to gauge the correct sewing thread for such a large textblock and the first attempt to sew it resulted in too much swelling at the joint, so it had to be re-sewn with a thinner thread.

During the rebinding process, it was clear that the new boards did not fit nicely into the joint and a layer of millboard was added to correct this. Finally, a very uneven tail edge prevented a standard sewn endband, so a reinforced variation was devised to provide support and fill in the gaps left by the uneven quire sizes, giving a strong, stable structure and neat finish.

The differences between the three manuscripts were as important as the similarities: the decisions and modifications made for each binding enhanced the project more than we ever anticipated, and provided a broader training experience than they might otherwise have had.

Fine judgment is needed to select the correct balance of materials and structure, and this can only be developed through experience gained by sustained practice in this specialist work.