Eagle and Spider: the conservation treatment of Nazi propaganda posters

Background to the project

The collection comprised twenty propaganda posters produced by and for the National Socialist German Workers’ Party (Nationalsozialistische Deutsche Arbeiterpartei) – or Nazi Party – dating from the year 1939, and in too fragmented a condition to consider their display or use for study, teaching and research purposes.

These posters were originally housed at the Taylor Institution Library where it is thought they were acquired from Hermann Georg Fiedler (1862–1945), Taylor Professor of German Language and Literature (1907–1937). The conditions in which the posters were housed at the Taylorian was never particularly satisfactory and, in 2016, the decision was taken to transfer them to the Sackler Library, which has a fully-functional climate-controlled environment (plus a more suitable space to accommodate them). 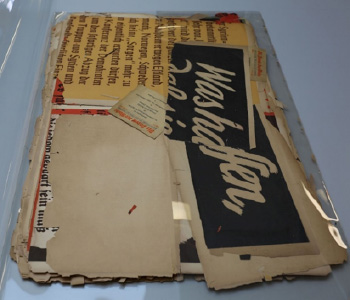 History of the posters

These Nazi propaganda posters are part of a series known as “Parole der Woche” (“Slogan of the Week”). They were distributed “in editions of 125,000 on a weekly-basis” in Nazi Germany and Occupied Territories from March 1936 to January 1943 . The posters’ production ceased abruptly owing to a growing lack of primary resources for printing – especially paper – as the War progressed and conditions deteriorated.

The Parole der Woche posters were published by the Nazi Party’s Central Propaganda Office (Reichpropagandaleitung) as part of a programme established both by the Minister of Propaganda, Joseph Goebbels (1897–1945), and by the Chief of the Reich Press Office, Otto Dietrich (1897–1952). They were produced on the printing press of the Central Publishing House of the Nazi Party in Munich, were very large (h 84 x w 120cm), and intended as placards, or “wall newspapers” (Wandzeitung), for display in public spaces such as cafés, hotel lobbies, and administrative offices. Not only was the posters’ content anti-Semitic, it was also anti-American, anti-British, anti-Churchill, anti-Polish and anti-Communist – in fact, anti-everyone and everything that did not support the Nazi regime or Nazi ideology. In addition, most of the posters featured morale-raising quotes from Adolf Hitler, usually rendered in the severe German Gothic script preferred by Nazi nationalists. Accompanying these posters, the Central Propaganda Office also published weekly leaflets and sets of carte de visite-sized cards incorporating the same type of iconography. These cards were sometimes glued on to the back of communications while others were also stuck on the verso of the posters themselves; a few such examples of this practice can be observed on the Sackler/Taylor posters.

At the end of World War II, the Allied Occupation Forces running the de-Nazification programme in Germany destroyed most of the posters that had survived at the Munich Propaganda Office. Hence very few posters were preserved, thus making this rediscovered collection an even more important tool for research, study and teaching at Oxford.

It is not clear exactly when the posters arrived at the Taylorian. Professor Fiedler retired in 1937 – before the publication dates of the Sackler/Taylor posters. A variety of materials came to the Taylorian from Professor Fiedler and it seems probable that the posters were included among these materials. As noted above, the posters are now physically housed at the Sackler Library, although they remain the property of the Taylor Institution Library. Following conservation treatment, the Sackler/Taylor posters represent a major teaching tool on how 20th century print media could be utilised to convey totalitarian, mass-propaganda messages using brilliantly designed intersections of text and image, employing boldface types, vivid colours, and retouched photography.

In terms of artefact composition, the Parole der Woche posters are made of extremely acidic paper. Similar to newspapers, they were considered ephemeral items, destined for immediate circulation, then replaced by the next week’s Parole der Woche, and not intended to last. Moreover, during the 1930s and 1940s, there was a huge shortage of publishing materials, especially in Nazi Germany, and it would have been very difficult to assemble the resources needed to mass-produce these posters on high-quality paper (such as cotton rag paper). These posters, therefore, were produced using low-cost, wood-pulp paper, from which the lignin has not been extracted. Lignin is an acidic component of wood that causes paper fibres to deteriorate; the chemical reaction and consequent deterioration is noticeable through yellowing and structural brittleness.

The Parole der Woche posters were produced on a serigraphic press, a fast and effective printing technique employing different layers of colour applied to the same paper. These layers are applied on top of one another through a print screen – between the application of each layer, the colours are left to dry or mechanically hidden to avoid any unwanted overlapping –, and they eventually form a superimposed effect of colour juxtapositions and/or overlays. The colours used for the posters are extremely vivid: primarily black, bright red, bright blue, bright green, and bright yellow.

Prior to their arrival in the Bodleian Libraries Conservation Workshop, the posters had been stored -- folded in four, piled on top of one another – and forgotten about for several decades. (Two posters had received treatment in the 1970s – they were backed on linen – and it was seeing these two posters, albeit much faded, that sparked interest in exploring the remaining poster fragments further.) When conservation staff first saw the pile of heavily fragmented paper it was impossible, even, to determine the number of posters in the set as they were in a very poor condition: extremely brittle, desiccated, yellowed and dusty. In addition, there were many detached pieces and small fragments scattered around the larger components. Consequently, readers’ access to the posters’ content for research and study was impossible – and that is the reason why they required conservation treatment.

Conservation assessment revealed that the group consisted of twenty posters, split vertically down their centres, with the exception of one poster, found in the centre of the set, that was split horizontally down its centre. The result, therefore, was 40 half-posters, plus many smaller, detached pieces (partly because the way they had been folded for so long had created tears along the fold lines). 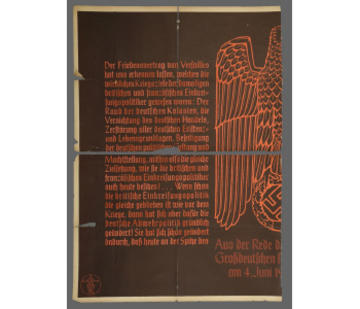 The aim of the conservation treatment was to be as minimum interventionist to the extent, but at the same time to make the posters accessible for research and study. Hence the treatment had to provide a safe way for staff and readers to handle the posters.

At the conservation workshop, we devised a systematic treatment applicable to all of the posters. Each poster’s half would be repaired as invisibly as possible, and reassembled. We decided, however, to leave each half-poster in its separate state, and not to rejoin the two halves of each the posters. Twenty full-size posters would have made these already fragile objects extremely difficult to handle and store. For example, even safe retrieval from plan-chest drawers and transport for reader viewing would have been susceptible to damage. For similar reasons of fragility, when we unfolded the posters we decided to treat them from their recto; flipping the posters to treat them on their verso would have necessitated further handling and caused yet more tears and losses.

Another conservation choice was to restrict humidification treatment to the extent possible as this would have damaged the posters’ paper, already prone to structural deterioration and staining due to its acidic content. Close observation and testing of the inks’ colour stability, however, revealed that the paper was stable enough to be locally treated.

The local repair treatment of the posters consisted of two steps:

Firstly, the creases were flattened with a solution of ethanol diluted at 50% in deionized water. This formula allows for the paper fibres to be released and the creases to unfold by increasing the humidity in a controlled and localised way. The solution was lightly brushed on top of the posters’ creases and left to dry under a polyethylene spunbound sheet (Bondina®), a piece of blotting paper or felt, and a light weight.

Secondly, the tears were rejoined with Dow 4M Methocel diluted at 5% in deionized water, and applied onto Japanese mending Tengu long-fibred paper (3.5gsm). Dow 4M Methocel is a purified derivative of cellulose that can be used as a conservation adhesive. It is easy to remove in the event a more in-depth conservation is subsequently be required – i.e., it is reversible.

An example of such an in-depth conservation approach might consist of a full lining of the posters, using Japanese long-fibred paper, to structurally reinforce the entire object; this might be done if the posters were to be hung vertically for an extended period – e.g., for an exhibition.

The long-fibred repair paper was cut into 4 x 8 mm strips to create “bridges” each side of the posters’ tears. As with the treatment of the creases, these repairs were left to dry under a polyethylene spunbound sheet (Bondina®), a piece of blotting paper or felt, and a light weight. Since the approach to using these strips was minimal, the result is that these ‘bridges’ are almost invisible and the visual interference almost non-existent.

Following conservation treatment, each poster was rehoused in a 91 x 66.5 cm polyethylene sleeve (Melinex®). Each posters’ sleeve is labelled chronologically according to its “Parole der Woche” week number for the year 1939, and each half of the poster is also clearly identified.

Paper conservators provided recommendations on the optimal flat housing for the 40 half-posters (plus the two that had been lined some years ago).

At the Sackler Library the posters will be stored in a 12-drawer plan chest, large enough to view each poster’s two half-sections side-by-side, and sufficiently shallow to prevent too many posters resting on top of each other (thus reducing manual handling issues).

Together, the Sackler/Taylor posters form a fascinating research and study collection. Their historical value and rare visual-textual testimony of World War II propaganda materials make them an invaluable source for academics and students seeking to understand the power of words and images – and their design interaction – during a critical period of European history.

The conservation treatment carried out by the Bodleian Libraries’ paper conservators has now made them safely available for research, study and short-term display at the University of Oxford.