About the picture books

The term Nara ehon 奈良絵本 (Nara picture books) generally refers to a genre of lavishly-illustrated literature, hand-produced in book or scroll format in Japan from the 15–18th centuries, originating among priests in the Nara area.

The literature produced in Nara ehon form belongs predominantly to the Otogizōshi 御伽草子, the generic name for a collection of popular short stories, which were in circulation around the Muromachi period (1336–1573).

Cover and opening from Kowata gitsune

The condition of the manuscript's fragile paint layers was of primary concern, in particular losses to areas of finely-ground Japanese gofun (oyster-shell white), which is very susceptible to flaking and powdering.

Losses to paint layers are associated with adhesive failure between the paint layer and paper support resulting in flaking, or cohesive breakdown within paint layers leading to powdering.

Gofun was applied in many successive layers by the artist, often with a high pigment to binding medium ratio in the upper paint layers to create a more brilliant and opaque white; the insufficient binding medium however contributed to its instability over time. As a binding medium deteriorates with age, losses occur in the weakened paint layers due to physical flexing of the paper support.

Adopting an approach of 'minimal intervention', the conservation treatment focused on stabilisation of paint layers which were in immediate danger of further loss. Flaking or powdery paint layers are stabilised with a consolidant, a material used to supplement a binder which is no longer functioning adequately.

The introduction of a consolidant has its dangers however, as when voids between pigment particles are filled the paint can darken in appearance. The type, amount, and distribution of the consolidant is therefore crucial, being strong enough to adequately bind the particles and adhere them to the support, but not cause significant changes to the refractive index and consequently the surface appearance of the paint layer.

Although 'gofun' is known to be the most commonly-used white pigment in Japanese painting, non-destructive analysis using X-Ray Fluorescence was used to confirm the white pigment as calcium-based, discounting other pigments such as lead white. 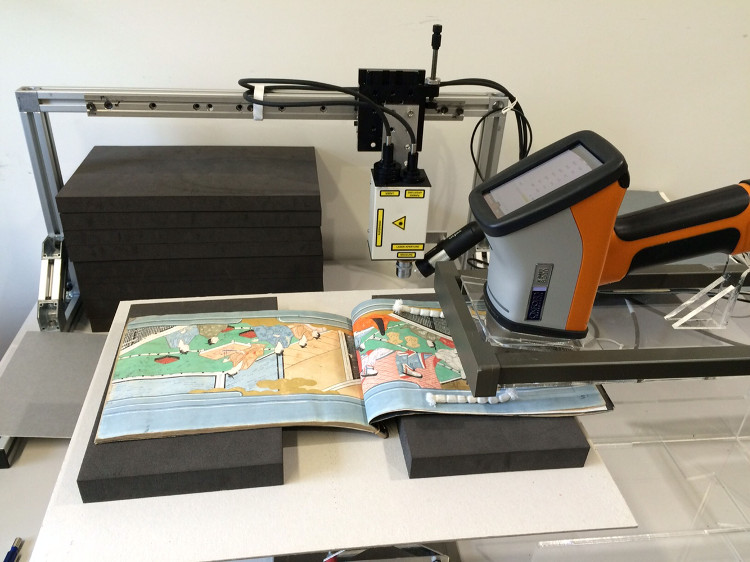 XRF analysis of areas of gofun

In order to test various consolidants, 'gofun' was prepared in a traditional way by grinding with a pestle and mortar, mixing with an animal glue (gelatine) binder, and painting out in thick layers replicating the manuscript's paint layers. These samples were used to observe the behaviour of the pigment, its tendency to flake, and its response to various consolidants. 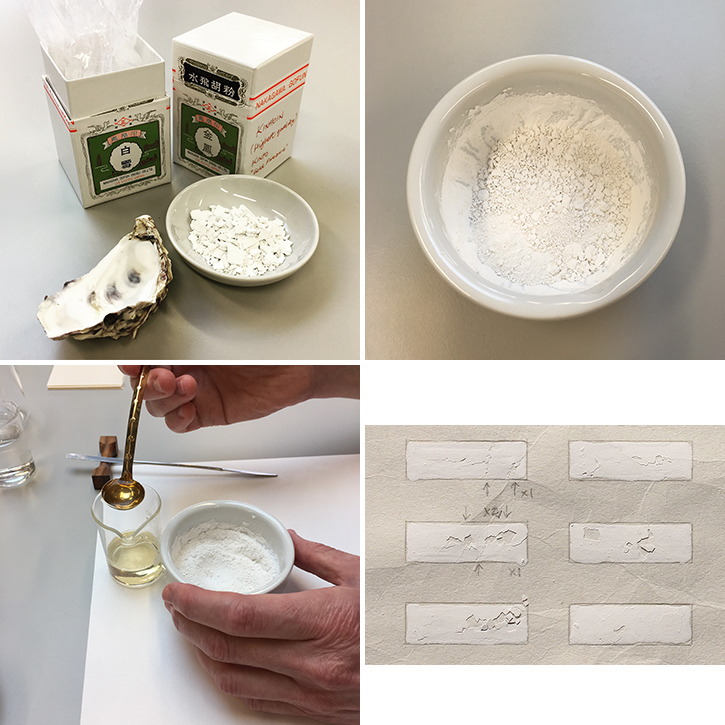 A number of consolidants were tested to find the most effective in stabilising the paint layers:

Although all proved effective, Jun Funori® (a purified extract from Funori) was selected for its strength in low concentrations, flexibility and minimal visual impact on the matte white surface appearance of the paint layer, backed up by positive results in artificial ageing tests in recently-published research.

Consolidants can be applied by brush or as a fine aerosol mist depending on how finely ground the pigment is, the porosity of the paint layer, and whether it is flaking or powdery. In the case of finely-ground 'gofun', even the powdery layers were not porous enough to allow a consolidant to penetrate sufficiently as a fine mist. As most damage observed was in the form of flaking, a fine sable brush could be used working under magnification, using a solvent (Industrial methylated spirits) with a second brush to 'settle' loose flakes and aid the flow of consolidant underneath the paint layer.

Jun Funori® applied by fine brush under a microscope

Within the first phase of this project, leaves displaying most significant losses and flaking were treated in 10 out of 21 volumes, ensuring that the manuscripts can be safely consulted in the future, without risk of further loss or damage. New folders and boxes were made to re-house the conserved volumes.

The Bodleian Libraries gratefully acknowledge a generous grant received from the Sumitomo Foundation in support of this conservation treatment.