This collection, which came originally from the Venetian noble family of Barozzi, was purchased by Pembroke for £700, and in that year he donated the majority of it to Oxford University (Macray, W.D., Annals of the Bodleian Library Oxford, Oxford: Clarendon Press, second edition, 1890, pp. 68–71).

Amongst the Greek manuscripts was a magnificent Byzantine manuscript, dating from the third quarter of the eleventh century, now MS. Barocci 230. It contains a menologion for the month of September by Symeon Metaphrastes and others. (Description (in German) in Corpus der byzantinischen Miniaturenhandschriften, Band 1, Oxford Bodleian Library I, by Irmgard Hutter (Denkmäler der Buchkunst, Band 2), Stuttgart 1977, pp. 49–51 no. 34, Abb. 172–178, 197–200)).

The manuscript includes a frontispiece showing the September saints in four registers, a quatrefoil title page and 22 illuminated headpieces. 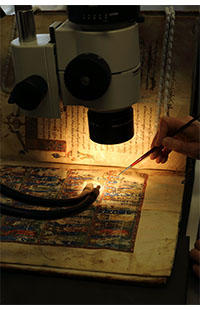 Fol. 3v, under the microscope

Greek illuminations are known to be susceptible to flaking, and MS. Barocci 230 is no exception. In 1984 the fragility of the illuminated frontispiece was a cause for concern, and the manuscript was withdrawn from normal access.

The manuscript was considered again in 2015, when it was selected for the Duke Humfrey's Night fundraising event. When examined under a microscope, the remaining paint layer was found to be cracked, areas of paint surrounding losses vulnerable, and some flakes of paint almost detached. The decision was taken to remove the frontispiece from the volume in order to minimize losses to the paint layer. Alongside the frontispiece (folio 3), the first bifolio (folios 1–2), with its illuminated title page and the first heading, would also be removed from the volume.

Detaching flakes of paint were reattached. Isinglass, an adhesive made from the swim bladder of fish, was selected to consolidate the most vulnerable areas of the paint layer. Using a microscope, a 1.5% solution was applied with a 000 sable hair brush under each loose flake.

This intervention was carefully considered beforehand because it would be irreversible, but with the selection of a suitable adhesive and technique, the illuminations could be retreated in the future if necessary.

Splits in the parchment text-block

Splits in the parchment were repaired.

One split on folio 1 had, in the past, been patched with a strip of parchment. This patch was almost detached and had allowed the edges of the split to move apart and distort. It left the illumination on the verso vulnerable when the leaf was turned and, because it was inflexible, had caused the folio to split further.

If old repairs are still functioning they can be left undisturbed, but in this case the parchment repair had failed, so it was removed.

This patch looked to have been cut from elsewhere in the text-block, as the patch itself presented pest damage, scored lines and blue edges – features found throughout the volume. The patch was recorded and retained because it was part of the manuscript’s history. Bringing the edges of the split back together was considered but not pursued; the gap would remain, and be stabilized, but not filled in with a new piece of parchment since nothing was actually missing.

The text-block has a pronounced undulation running vertically down the middle of it. Because of this, it was judged that a new patch of parchment would not have made a suitable repair for the split on folio 1.

In a different approach, a piece of Japanese paper was soaked in water and put in a blender, from which fibres were teased out. The fibres were tested for their ability to adhere, hold and follow the contour of the split. Where the edges of the split met, the substrate was held together with the paper fibres adhered to the recto and verso.

New pared parchment splints were then adhered across the remaining gap. Isinglass was chosen as the adhesive to stick the splints to the parchment substrate; it bonded well to the smooth surfaces when tested against other adhesives used for conservation treatments, namely wheat starch, warm gelatine and cold mousse gelatine.

The treatment enabled the manuscript to be digitized in-house, as one of the manuscripts and incunables that were assigned to a major digitization project extended in 2016. It had previously been withheld from digitization during the Polonsky Project's earlier phase, on grounds of its condition.

The illuminations on folios 1, 2, and 3 would remain vulnerable each time these leaves were turned and flexed due to the overall fragility of the cracked paint layer. This was why the decision was taken to treat them and not return them to the volume.

Folio 3, with its vulnerable full-page illumination, has now been re-housed in a window mount with hinged front and back boards. The edges of the folio and both the recto and verso are therefore accessible for viewing. The folio is attached to the window mount with Japanese paper strips and wheat starch paste.

As folio 3 verso is laid uppermost in the mount, the mount is hinged on the right-hand side so that it will be clear to the reader that the spine edge is on the right. A corrugated core within the mounting creates enough depth to protect the illumination from abrasion.

The first bifolio is re-housed in a dedicated Bodleian-style guard book. It is sewn into the spine of the guard book through some of the original sewing holes and through a strip of Japanese paper. Using the strip of paper meant that the holes at the spine edge of the bifolio did not need to be reinforced. The separated folios are stored together with the volume in a new custom-made archival box. This is a drop spine box with two cavities – one for the volume and one for the mounted folio and fascicule, both allowing for the removal of the items with two hands.

This conservation project was made possible thanks to the generosity of donors on the occasion of Duke Humfrey’s Night 2015. The Bodleian Libraries would also like to acknowledge a further donation, which supported the purchase of the custom-made box in 2019.