A project to conserve a variety of Chinese books in the Bodleian Libraries' collection.

The group comprised 7 books dating from 1701 – 1904, including works on geomancy, international law, and protestant missionary literature, and were made using materials whose quality differed markedly across the period represented. They also displayed variations in construction, revealing a diversity of cover and endleaf formations, as well as differing binding and sewing methods. 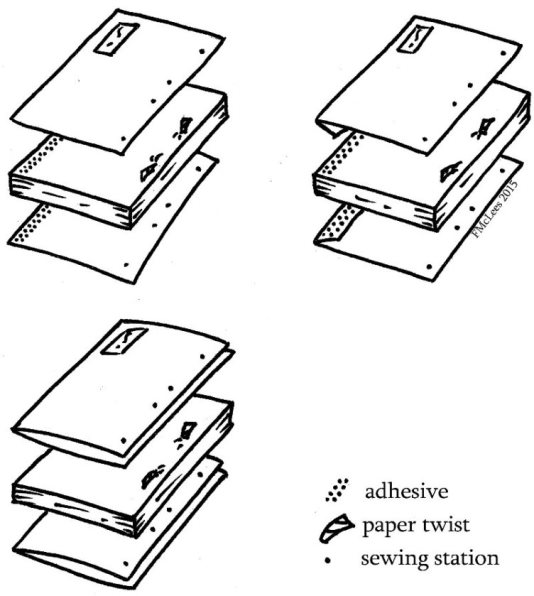 Chinese books are constructed from paper and silk thread and very little else, so differ greatly from many historic Western bindings which tend to feature heavy boards, leather and glues.

The thread binding is a Chinese binding format which was dominant for many years, right up until the twentieth century. In this style, sheets of paper are printed on one side only, and then folded in half to form bifolios.

Unlike a Western book, the folds are not at the spine but instead at the fore-edge (known as the shukou or ‘mouth’), leaving the blank side hidden from the reader. They are therefore side-sewn rather than stitched through spine folds and rely on the specific qualities of the fine, thin Chinese paper from which they are constructed in order for them to open fully. 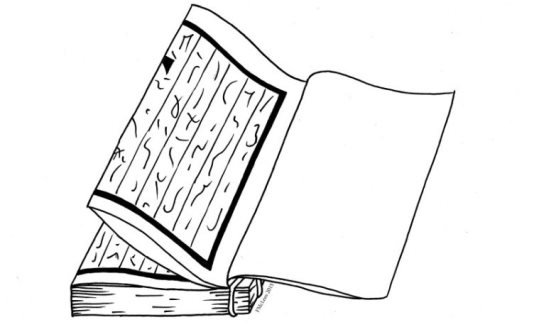 Usually thread bindings have an inner binding structure comprised of two or three paper twists inserted through pierced holes in the textblock in order to hold the book together, with separate paper covers then stitched in place using silk thread. The structure means that covers could easily be removed and replaced without having to pull apart the whole textblock, and could feasibly be done at home by the owner.

In contemporary conservation however, we try to preserve all existing parts of a book so rather than replacing the covers we aim to repair and strengthen them so that they can remain as an integral part of the book.

Some of the books required fairly simple treatment, such as Sinica 2887 (dated 1864), which only required some minor tear repairs. 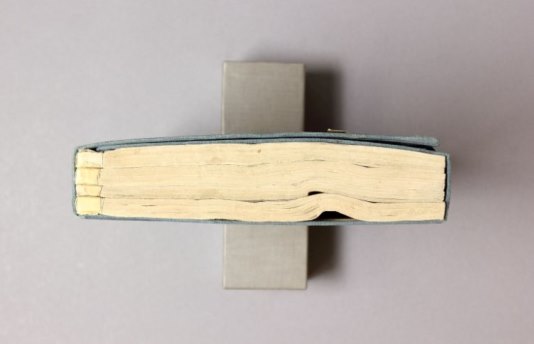 Sinica 2887 in tao, showing distortions when viewed from head 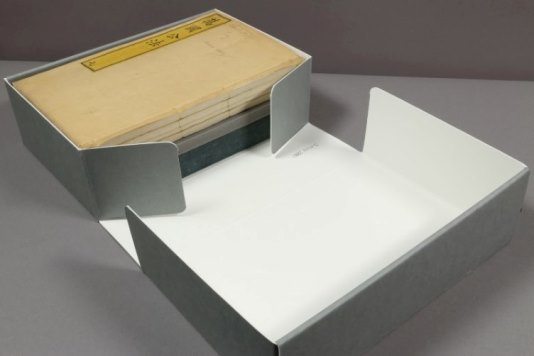 Sinica 2887 in new housing, storing fascicles on top of tao with plastazote in between

However the 4 volumes of the book (called fascicles) were constricted by the size of their original wrapper (known as a tao), and this had caused distortions throughout the textblocks. In order to reduce this, the fascicles were removed from the tao and placed between boards and gently weighted for a fortnight. Instead of constructing a new tao, or extending the old one, the tao and fascicles are now housed in a deep box with the fascicles resting above the tao rather than in it so that both can be viewed together without further detriment to the fascicles occurring.

Sinica 2505 (dated 1864) and Sinica 2488 (dated 1904) are two very thin pamphlet-sized volumes which lack the internal paper twists that would usually form the structure of a thread binding. These two books were instead solely held together by the outer silk thread stitching. The silk had begun to degrade and break, meaning that as they did not have the paper twists inside there was nothing else holding the books together.

These two books also have in common paper that has become brittle and liable to fracture easily when handled. In order to make them stable for handling, remnants of thread were removed so that the books could be fully opened out to allow repairs to be made to the torn and missing areas of the covers and pages. Where infills to the covers were required, Japanese tissue was toned using watercolours in order to preserve a sympathetic appearance whilst maintaining a distinction between the original materials and the repair.

In consultation with the curator David Helliwell, it was decided that Sinica 2488 should not be resewn. The poor-quality early 20th century paper used for both covers and textblock is exceptionally brittle, and although now repaired it is likely to continue to tear and split especially if pages are forced to bend as they are turned. In fact, it is safer to leave this book as a loose-leaf item unrestrained by sewing.

Sinica 2505 could be resewn safely. However, it was decided to reinforce the covers prior to resewing, as the action of pulling the sewing tight in order to get the correct tension in the thread might have proved detrimental to the edges of the covers. An adaption was made to the structure by inserting a piece of light but very strong Hasegawa Japanese paper between the cover and endleaf at both front and back, trimmed very slightly smaller than the dimensions of the book.

From the residual thread remnants found it was unclear whether the original sewing had used a single or double thread, but upon careful consideration it was decided to resew using a single thread in order to avoid the physical manipulation required to ensure that double threads remain parallel and do not cross. For conservation reasons, linen thread was used as it will not suffer the same acid degradation experienced by silk thread. A further adaption was to use a tiny paper twist as a stopper at the end of the thread in order to prevent the thread pulling all the way through the book when resewing; usually a knot in the thread is sufficient but in this case the sewing holes had enlarged over time to such an extent that something wider was required. 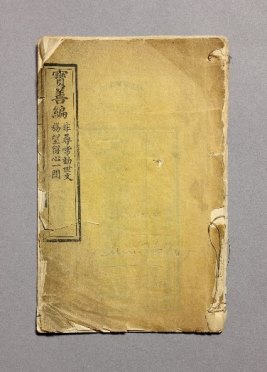 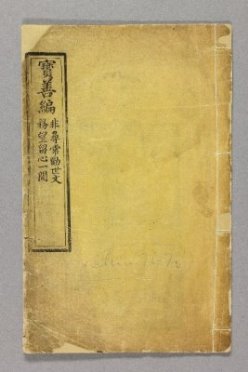 Sinica 379 (dated 1803) is a more typical structure where the textblock is held together by two paper twists, and the covers sewn on with silk thread.

The covers are composed of two thin papers folded together, which had become crumpled and torn over time, and in addition the silk thread had degraded and was broken in several places. The front of the book had suffered some mould damage towards the head and as a result the cover and title page both had lacunae in this area. As for the back cover, the top layer had become quite seriously torn and creased, and was almost entirely detached from the secondary layer below.

The partially broken thread sewing was removed to allow the covers to be detached and repaired off the book. The top layer of the back cover was gently humidified in order to flatten out the creases, and then minor tears in both covers and the textblock were repaired using very thin Japanese tissue and wheat starch paste. When repairing Chinese paper, a relatively thin and completely lump-free paste seems to work best as it keeps repaired areas supple and allows smooth application as the brush does not drag across the paper.

As the missing area on the front cover was quite large, Chinese paper Zha Hua was selected to be used as an infill paper as it is of appropriate appearance and weight, and would move in a similar way to the existing cover papers (ie. would have similar flexibility and would not create an overly stiff area). It was toned using watercolours before being shaped and adhered with wheat starch paste, and was also used to fill missing areas on the back cover.

As with Sinica 2505, the covers were strengthened before resewing by interleaving with Hasegawa paper; at the front this could be achieved by placing a piece in between the cover and title page, at the back the piece was inserted between the two layers of the cover itself. The book was then resewn with linen thread, in the typical thread binding pattern using double thread. 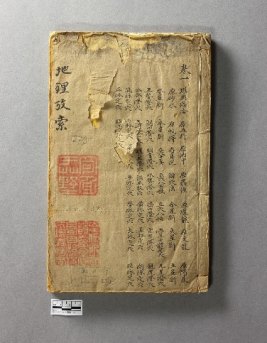 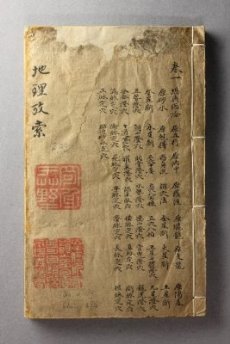 Sinica 268 and Sinica 387: undoing past modifications

Sinica 268 had been unnecessarily placed within a Western-style case binding, which restricted opening and altered the original character of the book. The Chinese binding was intact inside this, and in perfect condition, so it was simple to take off the case binding and use a poultice to remove traces of adhesive. However, sometimes previous approaches did show great sympathy for the original Chinese form.

Sinica 387 (dated 1701) had been provided with a wrapper which emulated many aspects of a Chinese tao whilst using Western materials and was devised in such a way to present a Western-style rounded spine when on the shelf. Many such examples are evident in the Bodleian’s collections and are worth maintaining as they still provide adequate protection to the object and are witness to the continuing development of conservation approaches blending East and West. 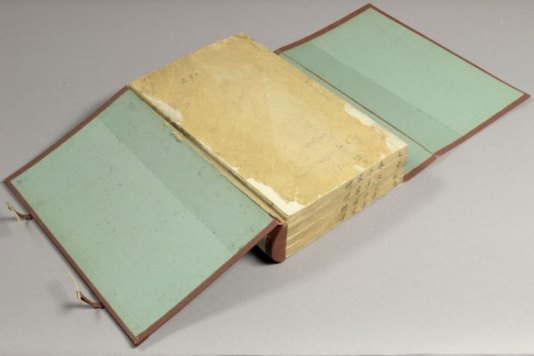