This programme seeks to prevent and mitigate damage from library and archive pests in ways that are environmentally responsible to both our staff and our collections.

The prevention and treatment of pest damage to library collections has existed since the library opened its doors in 1602. A letter from Sir Thomas Bodley to Thomas James (Bodley's first librarian) confided 'I hope those little worms about the covers of your books come by reason of their newness, and that hereafter they will away' (1600's from Reliquiæ Bodleianæ: or some genuine remains of Sir Thomas Bodley [ed. by T. Hearne.]. 1703).

More than 400 years later, our current understanding and approach to library pests have improved a great deal.

The Preventive Conservation team created and maintain an integrated pest management programme across the Bodleian Libraries.

The Bodleian mainly treats infested items by freezing them at -20ºC for approximately 2 weeks, which will lead to the demise of all stages of the life cycle for the insect pest of concern. This method allows for minimal damage to the object itself and avoids the use of pesticides.

However, the process of freezing can cause damage to some composite objects, such as those with inlays or enamel decoration. For these items, another treatment option is to create an oxygen free environment (anoxic). Anoxic treatments have been in use as conservation treatments, since the 1980s.

Anoxia as a treatment

The key idea behind anoxia as a treatment is that the infested object is placed into a bag or enclosure where the oxygen is reduced to levels sufficient to kill all stages of the life cycle for that particular insect.

Many studies over the years have looked at insect mortality data and carried out tests to determine effective levels of oxygen and duration of treatment etc.

Most studies agree that levels of oxygen below 1% are required for various durations to kill most insects in most situations (Selwitz and Maekawa 1998). Low oxygen levels are achieved using one of 2 ways, dynamic or static methods.

A dynamic system uses an inert gas, continually pumped into the enclosure to help displace oxygen. It may or may not include an oxygen monitor which records levels of oxygen to indicate when the gas should be increased or decreased.

Anoxia trial at the Bodleian Libraries

In 2013 the Preventive Conservation team trialled a new static anoxia treatment, comprising of an oxygen scavenger, sealable enclosure, oxygen monitors and desiccant to create a sealed oxygen free environment to treat objects. The oxygen scavenger is based on the redox reaction of rusting.

The initial test established the efficacy of the system to maintain a low oxygen environment and to kill larval stages of two library pests.

For each new test a variable was removed from the system in order to see the effect on the system.

By the end of the third test, it was clear that the oxygen scavenger was releasing moisture as a result of the reaction. 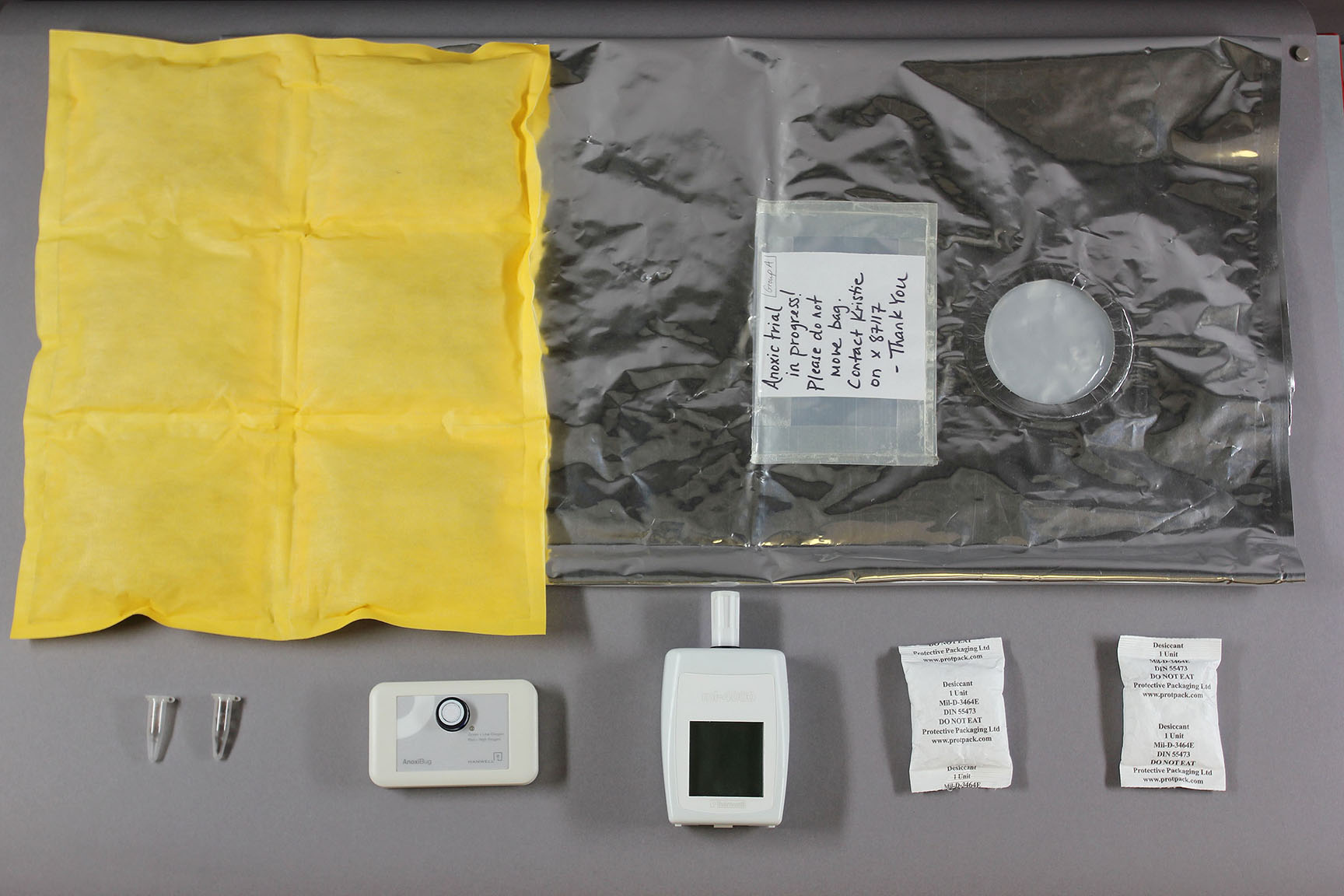 The conclusions gathered from these tests led the Preventive Conservation team to postpone the use of the product on library materials, but with some modifications, it has potential for use as a treatment in the future.