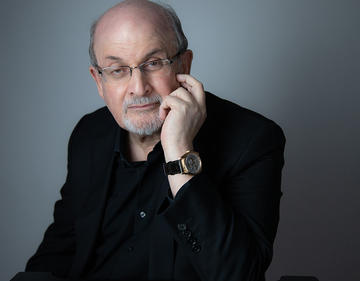 Oxford Reads for Rushdie is a public event held by the Bodleian Libraries in support of the novelist Salman Rushdie. It featured prominent figures from the literary world, alongside students from the University of Oxford, reading from Rushdie's works.

The event was held at the Weston Library in solidarity with Salman Rushdie, who survived an assassination attempt in August 2022. In partnership with English PEN, it followed an event at the New York Public Library organised with PEN America, held immediately after Rushdie was attacked, and an evening of solidarity organised by English PEN and others at the British Library in October.

Oxford Reads for Rushdie is the brain-child of Richard Ovenden, Professor Dame Hermione Lee, Emeritus Professor of English Literature at Oxford University, and Professor Dame Marina Warner, Distinguished Fellow of All Souls College at Oxford University and Professor of English and Creative Writing at Birkbeck College London. In hosting the event, the trio wanted to publicly mark both the Bodleian's and the University’s longstanding commitment to protecting academic freedom of expression.

The Bodleian has a proud tradition of supporting freedom of expression. In the 1660s and the 1670s, when the works of John Milton were banned by Royal Proclamation and all copies were ordered to be burned, Bodley’s Librarian refused to surrender a special copy of his works – which had been presented to the library by the poet.  We stand firmly with Salman Rushdie today in the wake of this horrific attack. We are proud to protect the freedoms of all writers, who are fighting to protect their right to write and publish whatever they want to, and in turn, those of readers, who have the right to read and hear them.